Discrete power transistors are entering their final chapter. Integrated GaN-on-Silicon offers higher performance in a smaller footprint while significantly reducing the amount of engineering required. Efficient Power Conversion’s (EPC) family of integrated power stages, the ePower™ stage IC, EPC2152, is the next significant stage in the evolution of GaN power conversion, from integrating discrete devices to more complex solutions that offer in-circuit performance beyond the capabilities of silicon solutions and enhance the ease of design for power systems engineers

When operated in a 48 V to 12 V buck converter at 1 MHz switching frequency, the EPC2152 ePower Stage achieves a peak efficiency above 96% with a solution that is 33% smaller in size on the printed circuit board (PCB) compared to an equivalent multi-chip discrete implementation.

The EPC2152 is the first offering in what will be a wide-range family of integrated power stages available in chip scale package (CSP) as well as multi-chip quad flat modules (QFM).  The family will fill out with products capable of operating at high frequency up to 3 to 5 MHz range as well as high current from 15 A to 30 A per power stage.

The figure below shows the system efficiency of the monolithic power stage (green line) when operated as a buck converter at 1 MHz with 48 VIN and 12 VOUT at 10 A.  The black “X” in the figure shows the comparative performance of a state-of-the-art silicon solution at 1 MHz. The GaN monolithic power stage achieves a 50% reduction in power loss versus the silicon solution.

Also demonstrated is the advantage gained by integrating the driver and the power FETs on the same chip.  The blue line is the measured efficiency of the identical half bridge, but with discrete GaN FETs and the driver and level shift in a separate Si-based IC.  The two main reasons for the significant improvement in efficiency are; (1) the reduced inductance in the gate loop when the driver and power devices are in intimate contact on the same chip, and (2) the monolithic integration of the two power FETs cuts in half the overall power loop inductance.

The EPC2152 power stage operating at 1 MHz (blue line) has an overall power loss (including inductor and control IC) at 10 A that is 50% lower than the best Si MOSFET solution (black X) when operated with 48 VIN and 12 VOUT.  The green line shows the comparative performance when the power stage is fabricated with discrete GaN FETs driven by a silicon IC. – see supporting diagram

The EPC2152 family of products makes it easy for designers to take advantage of the significant performance improvements made possible with GaN technology. Integrated devices in a single chip are easier to design, easier to layout, easier to assemble, save space on the PCB, and increase efficiency. 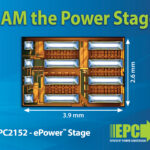