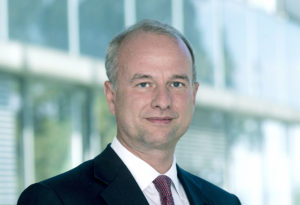 Alexander Everke is a leader who is truly changing the face of the electronics industry. As the inspiring CEO of ams AG, Alexander is overseeing the company’s evolution from components maker to one of the most powerful forces in the electronics industry, in particular in the exciting area of sensor solutions. At ams, the motto is “sensing is life,” because the sensors they ideate and manufacture put the “intelligence” in electronics – from smartphones and wearables to autonomous vehicles, medical devices and more.

With Alexander’s leadership, award-winning ams technologies are relied upon by most of the world’s leading manufacturers of electronics.

At ams, Alexander’s accomplishments are many:
• He leads an organization that delivered record revenues of USD $2085.9 million for 2019, up 32% year-on-year.
• He oversees a team of 9,000 employees serving more than 8,000 customers with 21 design centers globally.
• He is the mastermind behind ams’ successful long-term strategy to become the global leader in sensor solutions for optical, image and audio sensing.
o Under his guidance, ams has successfully acquired a number of technology companies, building out a focused portfolio that has transformed ams into a sensor-focused company
o Has helped grow ams to be the leader in optical sensing for consumer applications, serving the world’s largest consumer OEMs
o He has overseen ams’ role in the transformation and growth of 3D sensing, where ams has strengthened its leadership position based on outstanding system and solution expertise across technologies.
o He’s helped build ams’ leading position in illumination for 3D sensing based on highly differentiated high-power Vertical Cavity Surface-Emitting Lasers (VCSELs)
o He’s been a significant contributor to ams’ success in all three 3D approaches: Structured Light, Time-of-Flight and Active Stereo Vision and support both front- and world-facing 3D sensing
o He’s been instrumental in ensuring ams has high power VCSEL technology, better positioning the company for the upcoming adoption of LIDAR-based 3D sensing from assisted towards autonomous driving
o He’s ensured ams has its own in-house VCSEL production capability in Singapore
o In December 2019 ams, under Alex’s leadership, was successful with an all-cash public tender offer for OSRAM Licht AG (“OSRAM”).

Alexander’s semiconductor industry career began in 1991 at Siemens, where he served as Marketing Manager and Director. He later joined the Siemens’ spin-off Infineon and moved through the ranks from the memory products division VP of Sales to VP of global sales, to Senior VP and General Manager of the chip card and security ICs business unit. In 2006, he joined NXP Semiconductors UK as General Manager, and worked his way up to the corporate management team, serving as Executive VP and General Manager of the multimarket semiconductors, high-performance mixed-signal and infrastructure and industrial business units.

Alexander holds a master’s degree in Electrical Engineering and an MBA.