Factory automation is already well established in many industries, but with the progress in Artificial Intelligence (AI), remote communication and the growing demand for shorter customer lead times, it is predicted to explode in coming years. Similarly, the growth of automated parcel-hubs is expected to rise spectacularly. The rapid development of e-commerce has contributed to the creation of highly automated hubs with conveyers, sorting switches and many other types of equipment requiring efficient and intelligent power solutions able to work in demanding environments.

Parcel hub-designers and hub-operators are facing multiple challenges in having to deal with a large variety and types of equipment. This not only requires high quality, high performances power supplies, but the ability to operate in harsh environments with a complex mix of mechanical, thermal and electrical constraints, while simultaneously reducing the overall energy consumption of these gigantic hubs. For example, the United Parcel Service’s (UPS) 1.2-million-square-foot facility in suburban Atlanta processes approximately 100,000 parcels per hour via a highly orchestrated series of conveyors, chutes, belts and ramps. 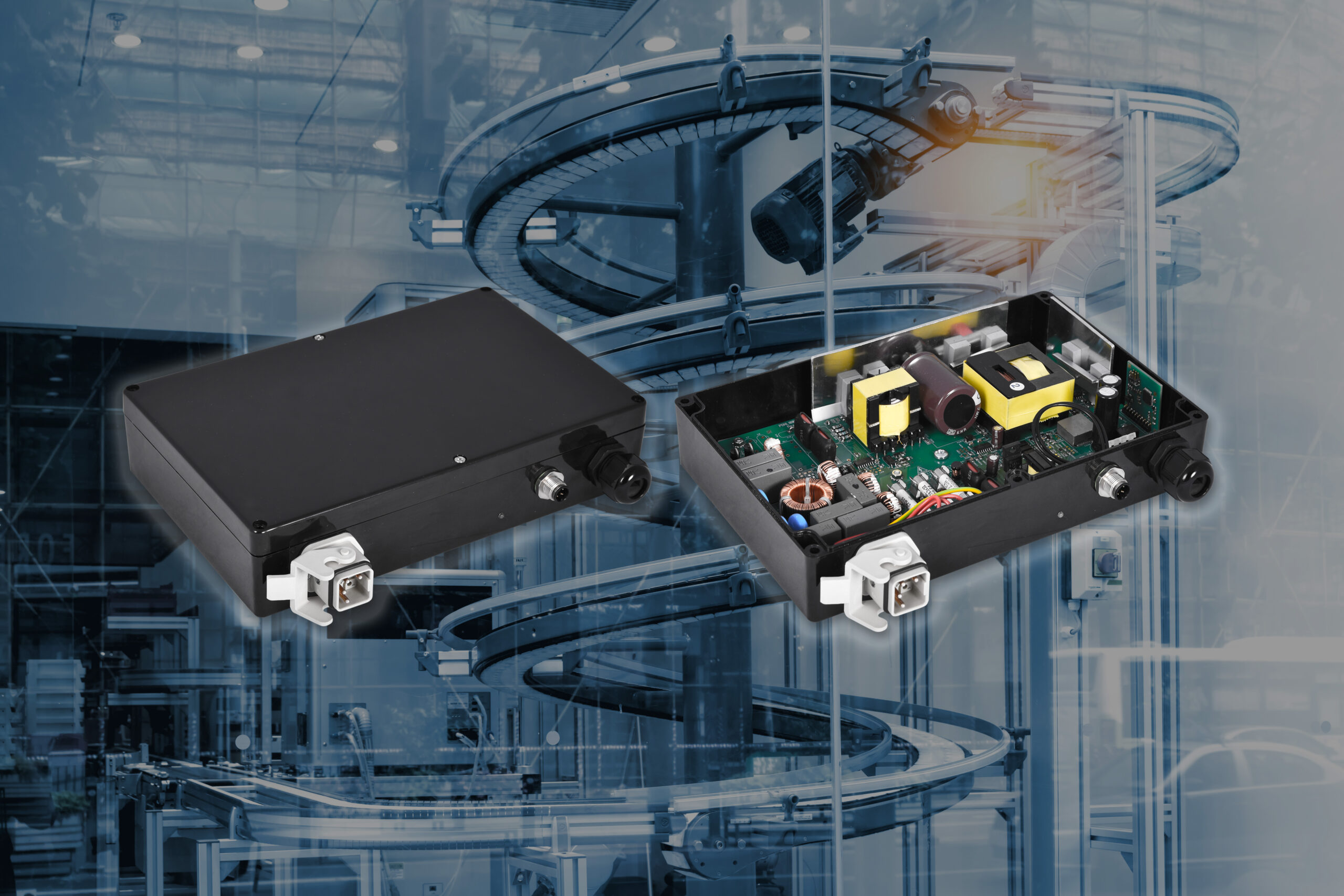 The new generation of parcel hubs are built on a very sophisticated architecture. Instead of having (say) a 100 metre long conveyer belt, the new lines are composed of shorter individual segments five to ten metres long, and turned on and off on demand when a parcel is transported from point A to point B. Each segment is powered by a DC motor requiring the use of an advanced power supply able to not only deliver power but also to meet the complex requirements inherent to the modern parcel hub environment.

Traditionally, below 1000W, DC motors are powered by a single phase AC/DC power supply. Though to simplify installation, reduce unbalanced phase loading and for better optimization of energy from the grid, parcel hub designers now require that all power supplies for DC motors have a three phase input for whatever the power level. Addressing this need, with its built in high Ingress Protection (IP) level for use in harsh environments, Powerbox’s three-phase ENI250A is not only a robust and efficient power solution but a mechanically reconfigurable platform able to fit different form factors or even direct integration into DC motors. Equipped with a micro controller, functions like peak power, current limiting, protection mode and behaviour, and others can easily be set to suit customers’ specific needs, shortening time to operation and conveyer upgrades.

Addressing 24VDC motors, the 250W ENI250A24 can deliver a high 480W level of peak power for one second, sustain high capacitive loads and manage energy recycling when a DC motor is decelerating or stopping. This function is very important for energy saving and to increase equipment lifetime. For higher power or redundancy, the ENI250A24 can simply be paralleled. The unit has an operating temperature range from -25 to +70 degree Centigrade.

The ENI250A24 includes soft-start, over current, voltage and temperature protection. An LED indicator informs the status of the power supply and a DC-OK signal and remote reset provide for easy integration within the conveyer operation management system. It is designed using Powerbox’s reliable power platform concept and uses an active power factor correction (PFC) in combination with a high efficiency and compact LLC topology. Other output voltages are available on demand to power 36V, 48V DC motors, as well as customized voltages.

The new generation of parcel hub conveyers use many more DC motors, which although in theory should result in higher power consumption, by using intelligent control, a high efficiency topology and recycling energy, PRBX’s ENI250A24 makes it possible to DECREASE the overall energy consumption. This is the result of combining advanced digital power control, monitoring, and proprietary firmware that optimizes parameters in real time. Also, obviating the need for load balancing, the ENI250A24 is a three phase input power supply, which is unique for such power levels and the first on the market to include all functions in one box, whilst conventional technologies are based on multiple modules (PSU, capacitor bank, monitoring and control) and single phase input.

Originally designed for Parcel hubs, the technology developed by PRBX can easily be re-used in other applications such as process control, but the concept of the three-phase input AC/DC modular platform with digital control also makes it easier to develop power solutions for larger conveyers such as the ones used in the mining industry.

The ENI250A is also able to benefit from S-CAP BOOST technology, that’s by including supercapacitors able to deliver very high energy on much larger motors and to recycle backyard energy during deceleration. Combining PRBX’s S-CAP BOOST with the ENI250A platform will open access to eMobility applications, which is a very promising, growing segment.