Pickering Interfaces is a supplier and manufacturer of modular switching and simulation solutions for use in electronic test and verification.   In September 2020, it launched the LVDT/RVDT/Resolver Simulator Module 41-670 range, which occupies only one PXI or LXI chassis slot.  The 41-670 module family is highly programmable and used to test devices that use either LVDT (Linear Variable Differential Transformer) , RVDT (Rotary Variable Differential Transformer) or Resolver to measure motion and/or position.  The 41-670 range provides multiple functionalities, increasing test flexibility and reducing the amount of hardware customers require.   Also, since the models in the range sit in a PXI chassis alongside a customer’s other instruments, additional control protocols/interfaces are not necessary, thereby simplifying operation. The modules also feature input and output isolation transformers, a wide operational frequency band and the ability to measure and display each input frequency and amplitude.

Linear variable differential transformers (LVDT) are electrical transformer sensors to measure linear displacement. Driven by an AC excitation source, the LVDT generates a pair of AC output signals modulated according to the core’s mechanical position (displacement). LVDTs have been widely used in applications such as power turbines, hydraulics, automation, aircraft, satellites, nuclear reactors, and many others. These transducers have low hysteresis and excellent repeatability.

Resolvers work similarly to an RVDT. The difference is that the primary and secondary coils on an RVDT are part of the stator. The rotator is the primary. The primary advantages of a resolver are improved accuracy and a full 360 degrees of motion. RVDTs are typically +/- 90 degrees.

Pickering Interfaces’ 41-670 LVDT, RVDT or resolver simulator module is more versatile than competing products which are usually limited to one function only.  Pickering Interfaces designed the new module to be intuitive to operate and it also integrated a graphical soft front panel for easy manual control.  Versatile enough for multiple applications across diverse sectors, the 41-670 especially suits the considerable demands and exacting standards of test requirements for aircraft wing and landing gear control, gun and missile launcher targeting, satellites, motion control for industrial automation and turbines and nuclear reactors.

The 41-670 modules can handle up to four channels of 5/6-wire LVDT/RVDT or resolver, or eight channels of 4-wire LVDT/RVDT simulation. Each VDT bank has an independent excitation input, as well as the ability to use an internally generated excitation signal. It can operate with a shared excitation signal to each channel for synchronous test. Several models are available that support excitation voltages ranging from 0.25 VRMS to 38 VRMS and frequencies from 300 Hz to 20 kHz, meaning the 41-670 family can simulate a wide range of LVDT, RVDT, or Resolvers.

The phase relationship between the input and output signals is automatically adjusted to lag one cycle, so the phase delay can be negated. Where this is not acceptable, one of the outputs can be used to propagate the input signal resulting in an in-phase signal with the output, which can then be used for demodulation. With the addition of built-in relays, the 41-670 can also provide short or open circuits for each channel’s inputs and outputs, reducing the need for external switching for fault insertion requirements. The programmable phase delay can also be used for simulating imperfect sensors and cabling, artificially offsetting single or multiple outputs.

There are 150 different configurations available in the range of modules altogether and it is possible for customers to specify a configuration for a particular application. PXIe versions are also available on request.  Examples of seven popular models in the 41-670 family are:

Pickering Interfaces provides a full range of compatible cables and breakouts for the 41-670 LVDT, RVDT or resolver simulator.

All standard products manufactured by Pickering Interfaces have a 3-year warranty, with extended warranties and service agreements available. In addition, there is guaranteed long-term support, typically over 15 – 20 years. 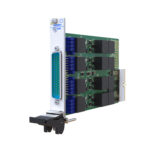