Temperature has always been an important parameter when testing sensor devices, but now the trend is moving from simple, functional tests to calibration at certain temperatures. This means that devices like temperature, gas, humidity and pressure sensors are not only dependent on highly accurate temperatures, but they also need to be exposed to a uniform temperature over the whole chuck.

There are two common ways, in which temperature uniformity can be reliably measured during wafer test. The first method is by using a measurement wafer, and the second option is to use a manual drop sensor. However, both methods have certain disadvantages, e.g., the uniformity doesn’t reflect the probing conditions, and the measurement data must be entered manually into the compensation table. Therefore, ERS electronic developed a completely new concept for temperature measurement in wafer test, which tackles the challenges experienced with today’s existing options.

The patent-pending device, aptly named ProbeSense™, consists of a temperature sensor, which is mounted in the probe card position on the prober. Taking advantage of the XYZ axis motion capability of the prober, the sensor can measure the temperature over several points on the wafer surface in the same conditions as during wafer probing. ProbeSense™ is delivered with adapter plates to fit your prober of choice and is thereby compatible with all wafer probers in the semiconductor industry. Included in the ProbeSense™ package is also a temperature measurement instrument, which has been calibrated together with the sensor in the mK range.

By integrating ERS’s ProbeSense™ software in the prober, the process can be fully automated, allowing a test script to be run for multiple points and at multiple temperatures on the chuck without the need for an operator. MPI Corporation is the first prober manufacturer offering this add-on function in its probing stations.

“MPI Corporation sees a clear benefit of integrating ProbeSense™ for thermal chuck calibration into SENTIO® Prober control Software Suite. The fully automated procedure provides intuitive operation and fast results by utilizing the night or the weekend for calibration, thereby eliminating the need to sacrifice valuable test time”, says Stojan Kanev, General Manager of Advanced Semiconductor Test at MPI Corporation. “By offering this capability to our customers, we are addressing their demand for a cost- and time-efficient thermal calibration solution.” 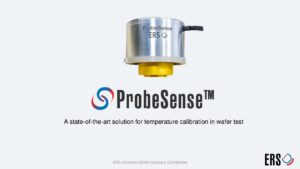 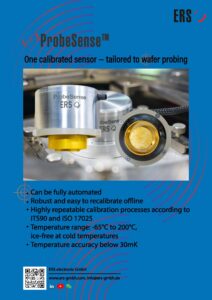