The number of radar on-board today’s vehicles is increasing; where, in the past, a single forward-looking long-distance radar has been used to handle collision-warning and emergency-braking features, additional corner and sidewards-looking radar are now being incorporated to increase the vehicle’s awareness of its surroundings.

As a result, more scenarios need to be tested. Including situations such as other vehicles incoming at various angles and with high closing speeds: for example, to detect and avoid impact with an approaching bicycle or motorcycle.

Limitations of Road and Conventional Laboratory Testing
Simulating such situations during actual road testing is time-consuming and expensive, involving driving many millions of test kilometres in various environments and locations worldwide. Adding new scenarios to the tests that must be performed, to encompass testing every aspect of a multi-radar setup, places even greater pressure on development costs and time to market. Safer ways of testing critical features such as emergency braking are also needed.

On the other hand, testing these situations in laboratory conditions, using conventional equipment, has its own challenges. The usual way to simulate lateral-moving objects involves physically moving the antennas into different positions and repeatedly re-testing. This takes time, complicates testing, and increases wear and stress on components such as cables and connectors.

Full Over-the-Air Testing
The R&S RTS provides a solution to these challenges. It’s a target simulator that generates dynamic radar echoes that can be used at all stages of radar sensor testing, from pre-development through hardware-in-the-loop lab tests to validation of ADAS/AD functions integrated in the vehicle. Instead of requiring testers to physically move antennas, the RTS uses innovative techniques including electronically switching antennas on and off to simulate the effects of individual objects moving in various directions and at various speeds relative to the vehicle.

This delivers several advantages:
• Complex radar test cases and driving scenarios involving multiple moving objects can be easily defined and executed with excellent reproducibility.
• The test setups are created quickly using a graphical, touch-enabled tool provided with the equipment.
• Situations that would be difficult, time consuming or dangerous to test physically can be simulated safely and analysed in detail at relatively low cost.
• The radar system can be completely tested over the air, using hardware in the loop and vehicle in the loop methodologies, to detect any identifiable problems early and in
laboratory conditions rather than later in development during road testing.
• With no need to physically move antennas in between performing tests, the equipment is easier for engineers to use and testing can be accomplished quickly.
• Electronic switching of the antennas eliminates wear to RF cables or other moving parts compared with traditional test systems involving mechanically moving parts.

The antenna array frontend comprises multiple antennas and simulates the radar signature of a moving object by rapidly and automatically switching between them. There can be up to 192 independently switchable antennas to simulate objects moving laterally to the car’s direction of movement. Close antenna spacing of 3.7mm ensures fine angular resolution, which can be better than 0.5°. An optional transmit array makes it possible to simulate two objects close together and moving laterally to the car. Multiple frontends can be combined to cover larger fields of view of radar sensors. The frontend is designed to have low reflections and a small radar cross section, which maximise repeatability by reducing the sensor’s noise floor and suppressing close-range targets and multipath issues.

At the backend is a radar echo generator that can simulate a large number of independent artificial objects and dynamically vary their range, size, and radial velocity. With an instantaneous bandwidth of 4 GHz between 76 GHz and 81 GHz, it covers the typical frequency range of current and future automotive radar sensors. Multiple backends can be cascaded to represent large numbers of objects.

With the ability to emulate multiple objects, the system can handle anything from simple radar-based ADAS such as emergency braking, to auto-pilot and fully autonomous driving that requires a 360° appreciation of the surrounding environment. 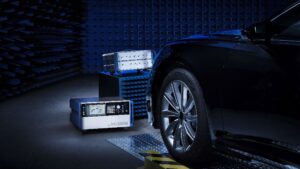