Automotive Product of the Year

In modern vehicles, in-cabin and instrument lighting play an increasingly important role in not only delivering a positive user experience for drivers and passengers but also in creating a positive association with the automotive brand. As a result, car manufacturers are looking to deploy sophisticated LED lighting solutions that blend elements of both comfort and safety. The iND83211 driver significantly speeds and simplifies these deployments by replacing multiple components with an intelligent, highly integrated, ultra-compact MCU-based single-chip solution for the intelligent control of interior lighting systems that reduces design complexity, total BoM and cost.

The positive contribution that lighting can make to our well-being is well understood by architects and interior designers creating living and working spaces. Warm and cool lighting, for instance, goes far beyond simply creating a visual impression and can be employed in different ways to engender different feelings. Now that same thinking is being applied to improve the in-cabin experience for drivers and passengers and create everything from a sense of orientation and a feeling of spaciousness to a more relaxing and less stressful driving environment and the reduction of night-driving fatigue. What’s more, the ability to configure and modify internal lighting also allows drivers to personalize their vehicles.

Achieving these advanced, configurable lighting schemes demands advanced lighting control systems that are capable of operating in the demanding automotive environment. Until recently these systems had been created using various discrete components but now, with the availability of the iND83211 Intelligent Driver for High-Power Automotive LEDs, it has been made possible to reduce component count, which, in turn, saves space, reduces the bill of materials and improves reliability by reducing potential points of failure.

The iND83211 is an automotive-grade LED lighting IC driver with an integrated 32-bit Arm® Cortex® M0 processor, 64kB of Flash and 16kB of SRAM. The IC includes a flexible power management system and up to 24x 5V programmable current, open-drain IOs with 16-bit pulse width modulation (PWM), monitoring features and automotive LIN interfaces. Capable of driving 24 LEDs or 8 x RGB channels, the device can also be used to drive fewer LEDs at higher currents to create LED ‘light pipes’ that transport light from an LED source to where it is needed. Because the IC can withstand a 40V load dump from the car battery, it can be connected directly to the automotive supply, further minimizing the need for additional components.

The buck converter delivers up to 750mA supporting high-current LEDs which require more than 200mA per RGB channel. This converter has a 5V nominal output that can be adjusted down to 3.8V while keeping the current constant. In addition, any of the 24 channels can be connected in parallel to increase the current-sinking capabilities. Firmware configuration of each channel’s current allows for optimal load distribution.

To maintain stable color and intensity when there are temperature fluctuations, the iND83211 hardware includes a proprietary LED PN voltage detection circuit to accurately measure the LED temperature. Once the junction temperature is measured, a color correction factor is calculated using the on-chip 32-bit Arm® Cortex® M0 processor and applied to each individual channel RGB using the 16-bit PWM and 100uA current stepping hardware. In addition, an integrated temperature sensor sets a specified limit to ensure the LEDs and supporting components do not exceed their operational limits and risk overheating.

Two LIN transceivers create a fixed connection using node configuration and identification service or auto addressing with slave node position detection. This interface is used to send or receive commands, diagnostics, and status information. With the embedded core, the iND83211 can adjust the color of the LEDs using only the received color coordinates; all required configuration hardware parameters are calculated on the fly. 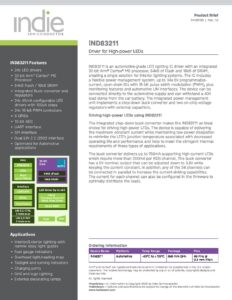