Semiconductors Product of the Year

The ADXL367 is a 3-axis, ±2 g/±4 g/±8 g, 14-bit digital MEMS accelerometer with a rich digital feature set in a small (2.2×2.3×0.87 mm) package that only requires nano-Watts of power to operate. It embodies – by far – the best noise performance, at the lowest amount of energy consumed, available today.

This ultralow power sensor consumes only 200 nW for motion detection in wakeup mode, and 970 nW when streaming 14-bit data at 100 Hz. When placed in its lowest noise setting, the noise density drops to 170 μg/√Hz for all three axes, while only consuming less than 2 uA. The product also has numerous built-in features that help with reducing the end system power consumption and increase battery lifetime, such as a digital temperature sensor, configurable tap detection, activity/inactivity detection with adjustable thresholds and timing settings, autonomous interrupt processing, and a deep 512-word FIFO. The tap detection core operates in the analog domain and consumes only 35 nA of additional current independent of the data rate or mode of operation. The ADXL367 can operate with as little as 1.1V supply and has a built-in voltage regulator that allows for direct connection to batteries while also improving PSRR. The ADXL367 is also capable of synchronization for sensor fusion application by providing either an external clock or external trigger signal to the sensor. In summary, the ADXL367 not only makes no performance compromises, but adds a rich feature set, while pushing the limits of physics with respect to its groundbreaking power performance.

The ADXL367 is the latest in a series of industry ‘firsts’ and game changing advancements in the inertial sensor space that ADI has introduced over the past 30 years. In 2012 its predecessor product, the ADXL362 dramatically cut the energy needed to gather meaningful motion data – by a factor of 50 over contemporary offerings. ADXL367 now not only improves power consumption by an additional 3x (10x in low-noise mode), but improves noise performance by 30%, and adds several features and enhancements as compared with its predecessor. By introducing this new capability ten years ago we dared the industry to imagine what could be and the answers came pouring out, from wearables and watches that needed no recharging months on end, to medical implantables, animal trackers, keyfobs, even a diaper monitor. In 2022, designers can once again set about imagining what they might create with a source of high resolution motion data with a high SNR, and almost infinitesimal power consumption.

From a technology standpoint, the ADXL367 is a mixed-signal product that operates down to 1.1V in an 0.18 µm CMOS process in addition to which it is internally regulated (operating voltage is even lower). That states the complexity of the problem at hand. ADI has applied all of its expertise in low-power operation – and has invented a few new ones. Furthermore, performance is guaranteed over an industrial temperature range of -40 °C to 85 °C. There’s no catch. All performance parameters are in-line or better with what would be expected for an accelerometer in this ‘general purpose’ class while operating at the edge of what physics will allow.

Since we have become accustomed to recharging anything from our phones to now even our cars, an ultralow power accelerometer may seem irrelevant. However, there are still many things in the world that need to operate on primary cell batteries and/or have mission profiles that require battery lifetime to be measured not in hours and days, but months, years, and decades. The ADXL367 offers two types of benefits. The first is clearly in reducing energy consumption in systems that need to sense motion on a 24/7 basis. These could be medical monitors for in-patient or chronic care, hearing aids, medical implantables such as cardiac monitors, neurostimulation devices, pacemakers, and other new applications hitting the market in the future. ADI offers a medical implantable quality grade option for both the ADXL362 and ADXL367 suitable for FDA Class 3 devices, and is the market leader in mission-critical inertial sensors for the healthcare industry.
For hearing aids, the key enabling feature on the ADXL367 is the 1.1 V operation, which allows the accelerometer to be directly connected to primary cell Zinc Air batteries and saves on additional regulation and ancillary components that would come at the heavy cost of additional area in an already space constrained environment. In addition to healthcare applications, there are a host of other applications for monitoring the activity of humans and animals that need to minimize power consumption such as high-end wearables, earbuds, animal trackers and monitors.

The second type of application that can benefit from the ADXL367 are ones that use it to reduce and manage the system-level power consumption of the end product. The accelerometer comes with many integrated features that effectively turn it into a very low current consuming event detector and motion switch. The ADXL367 can sit in an extremely low power state and issue interrupts that power on and off a system based on vibration, movement, orientation detection, and tapping/tactile user interface. These features can be used to power cycle a system based on usage, for security and tamper detection, and to record event-driven information. Example applications include key fobs, security systems for homes and vehicles, tamper protection on utility meters, event detection for Industrial IoT (IIoT) systems and others.

Analog Devices is confident that this new capability will engage and stimulate the creativity of individuals and organizations around the world, and we are looking forward to seeing what new innovative approaches and solutions emerge over the next decade. 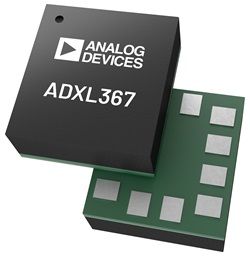